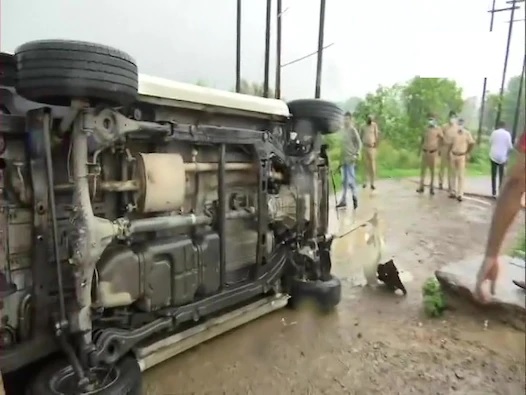 In Kanpur, Vikas Dubey was killed during a fight with the UP STF team. Vikas Dubey, arrested on Thursday from Ujjain in Madhya Pradesh, was bringing the STF team to Kanpur, meanwhile, the STF vehicle overturned and Vikas started running away. And after this, there was an encounter with STF. During this, Vikas Dubey was also shot. Vikas was taken to the District Hospital of Kanpur for treatment but the doctors confirmed his death.

Earlier, the UP STF team was coming back from Ujjain to Vikas that their vehicle overturned on the way. Policemen injured in this were injured. Vikas Dubey was also seriously injured in this road accident. According to the information, Vikas had a serious head injury. Not only this, when the information reached Lucknow, but there was also a panic among the top officials.

Not only this, after the vehicle overturned, but the encounter also took place between Vikas Dubey and the police in the injured state. Meanwhile, Vikas Dubey was shot in the firing and he was seriously injured. Vikas was rushed to the District Hospital of Kanpur in a hurry, but doctors confirmed his death. Let me tell you that Vikas was running away with a weapon after turning the vehicle over. He fired on the STF team with the same weapon. There was firing for 10 minutes from both sides. A soldier is also injured in this encounter, a bullet is shot in his thigh.

A 22 years old boy Mithun Thakur got Punished for Loving...