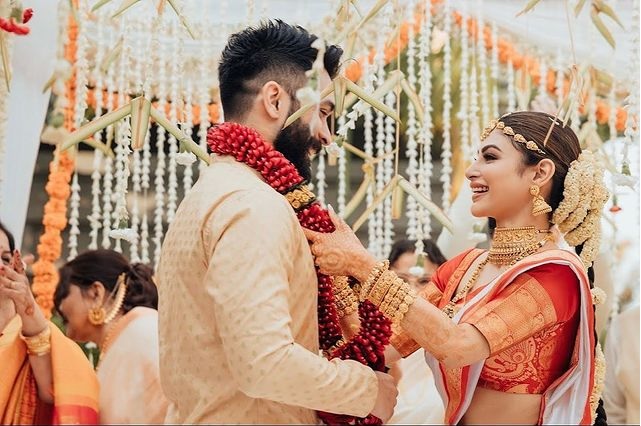 Actor Mouni Roy married her Dubai- based boyfriend Suraj Nambiar in Goa on Thursday. The pre-wedding festivities like mehndi, haldi etc began yesterday and this morning. The couple married according to South Indian rituals. Mouni Roy hails from Cooch Behar, a city in the Indian state of West Bengal and his husband Suraj Nambiar is an investment banker based in Dubai.

Wedding photos of the couple have been shared by guests, among them Mouni’s Naagin co-star Arjun Bijlani posted a picture of the newlyweds and captioned it, “Mr and Mrs Nambiar.” For her wedding actor Mouni Roy dresses in a traditional white saree with red and gold borders and a matching red and gold blouse. She wore South Indian wedding jewelry with a gold belt and a gajra wound in her plaited hair. Her bridal makeup was minimal, which featured kohl-layered eyes and a red lip. Makeup and Jewelry was giving her the complete look of the picture-perfect bride. Suraj Nambiar was stunning in a beige kurta and traditional white mundu. Mouni Roy also shared a photo on social media handles with fiance Suraj Nambiar from a pre-wedding ceremony and wrote “Everything #HariOm. Om Namah Shivay.”

Mouni Roy is known as a popular TV actor in India. She was seen in the popular TV show Kyunki Saas Bhi Kabhi Bahu Thi and gained limelight with the show, Devon Ke Dev…Mahadev, and played the lead opposite (Sati) Mohit Raina. She has also worked in two seasons of the popular TV show Naagin. Mouni has also worked on the silver screen and has appeared in films like Akshay Kumar-starrer Gold, KGF: Chapter 1, Romeo Akbar Walter and Made in China. According to media reports she will now be working as an antagonist in Ayan Mukerji’s Brahmastra. The film also stars Alia Bhatt, Ranbir Kapoor and Amitabh Bachchan and well known faces from the industry.