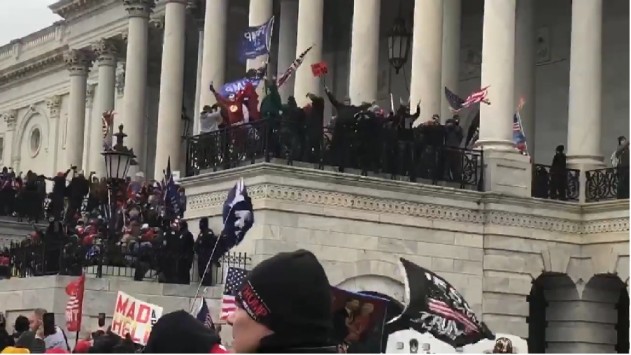 It has never happened in America’s 300-year history when an election-loser president has refused to accept his defeat, and his supporters surround the US parliament. Neither was shot in Parliament ever.

Washington: The tussle continues even after the US presidential election results. Supporters of President Donald Trump created a ruckus outside the White House and Capitol Hills. Now a lockdown has been imposed in Washington DC after an uproar in the US. At the same time, Twitter, Facebook, and Instagram have blocked Trump’s accounts. Also, some tweets and videos have been removed.

This has never happened in the US’s 300-year history when an election-loser president has refused to accept his defeat, and his supporters surround the US parliament. On Wednesday, supporters of President Trump gathered on the hilltop. The crowd started raging on seeing this. The precautionary security squad sealed the Capitol Hills, but the crowd became uncontrollable. Trump’s supporters entered Parliament, where the new presidential election results were being debated in both houses (House and Congress). After a while, the Parliament had to seal the results, and then suddenly, the security stool enters the Parliament. Then the sitting officer of the House is taken out safely.

How all this ruckus started

It all started after a ruckus by Hungama Trump. Scared of Parliament’s final decision on Biden’s victory, Trump had already convened a major rally in Washington. Supporters at this rally were enraged after Trump’s speech. Trump said directly that the US election was rigged and that Biden’s votes came from computers. Trump refused to believe that Biden had received 8 million votes. Here Trump was giving speeches, and the crowd was shouting Trump-Trump. During this time, Trump supporters entered the Parliament. Although Trump appealed to his supporters to maintain peace after seeing the crowd, Trump’s appeal was only nominal.