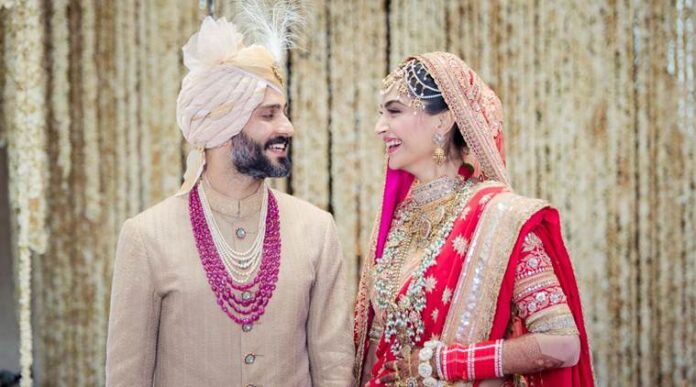 Sonam Kapoor and Anand Ahuja have been married on Tuesday. Reception will start in Mumbai this evening itself. The reception is expected to last till late night.

Let’s say that after Anand Karaj, there are great pictures of new couplet. After Anand Karaj, the fair and Jayalam’s rituals have been completed. It is Bollywood’s biggest wedding this year. Anand Ahuja’s Perfect Groom Style was seen in the dark beige-colored Nehru collar Shervani. Anand at Sherwani’s Ruby’s Bidid Groom Jewelery is looking great in the style of the royal groom.

Marriage was done at Sonam Kapoor’s masuri bungalow in Mumbai. Like music, a gathering of Bollywood stars in marriage too. Many big stars and legends of Anil Kapoor’s daughter got married During marriage, Sonam has traditionally brought the pavilion under the Lal Chunar. In the form of a bride, Sonam looks very beautiful. Most of the Bollywood celebas see turbans and bulls.

Who were the guests in the marriage?

The Rituals Observed At A Brahmin Wedding