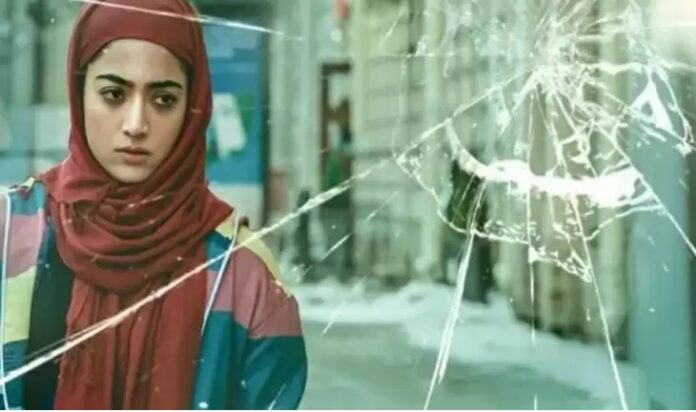 Rashmika Mandanna wears the hijab as the Afreen in Dulquer Salmaan’s next. She revealed her first look as Afreen in Hanu Raghavapudi’s next film which will be released on her birthday. In this movie, Dulquer Salmaan plays the lead role.

Today she shared her upcoming movie pictures. In this hijab, Rashmika was looking innocent and she wore combat boots, wide-legged pants and a multicoloured sweater. In this movie, she walks behind a burning car, in an area that had freshly substantiated riots. Her fans are liking this new look and are eagerly waiting to see this movie by Rashmika Mandanna.

She has jungled a lot between so many different movies and different industries too. She said ‘I had so many movies in my hands’. After the movie Pushpa, she gained so much popularity and became a superstar. In Pushpa, she shared the screen with Allu Arjun. This movie is a blockbuster movie of 2022.

Rashmika Is a very talented and beautiful actress. Her acting skills are superb. After the success of the Pushpa movie, she became everyone’s favourite and a national icon as well. The movie has made her a pan-India star and Rashmika will soon be seen in her next Hindi film with the actor Sidharth Malhotra in the movie Mission Manju in which Rashmika is playing a different kind of role. She was also seen in the movie Vikas Bhai Goodbye.

Legendary Actor Dilip Kumar passes Away at the Age of 98