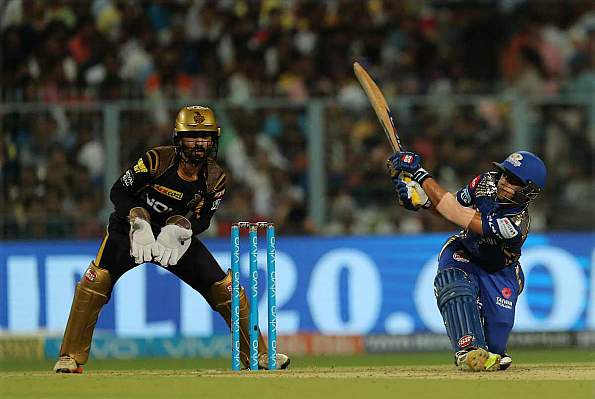 IPL 2018 was played in the match between Mumbai Indians and Kolkata Knight Riders. Ishaan Kishan is the hero of the match. He played a wonderful inning of 62 off 21 balls. All the Kolkata bowlers proved to be a failure before the player’s hurricane. In the 14th over of the match, he scored four consecutive sixes in Kuldeep Yadav’s over. Which led to the score quite a lot. The most special six of these four sixes was when he played a helicopter shot in the style of Dhoni.

Even after making half-century on 17 balls, Ishant Kishan did not stop and started attacking Kaka. He played the helicopter shot at MS Dhoni Style on the next ball. The ball crossed the straight boundary and left for sixes. Captain Rohit Sharma was also surprised to see Ishant’s batting. Sunil Narine was brought out to get them out. He also hit a six off Narine. But he was out on the next ball.

Due to their horrible innings, Mumbai Indians managed to score 210 runs in 20 overs. After that Mumbai bowlers bowled brilliantly and all-rounded out Kolkata for 108 runs. This was Kolkata’s biggest defeat. With this win, Mumbai Indians have now entered the top four. To remain in top 4, it is important to win all the matches.

5 Surprising and Not So-Surprising Hobbies of Pro Footballers from Cristiano...