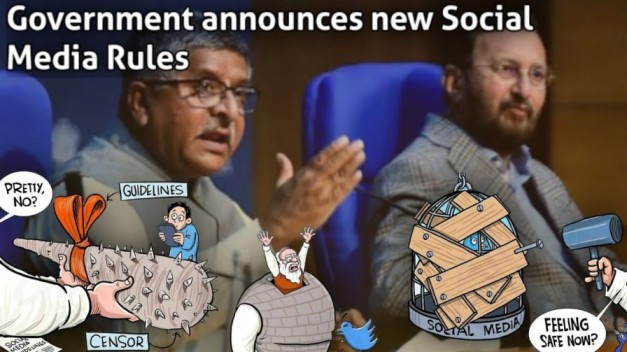 The government  has announced its draft Information Technology (Intermediary Guidelines and Digital Media Ethics Code) Rules, 2021, for social media platforms, OTT players & digital media. In a press conference on 25th February, the union minister of law and justice announced the draft of rules to regulate the information in digital media. The new rules with a focus on self regulation, propose significant steps to control the fake news, abuse and other issues. The rules include an oversight mechanism involving several ministries and a code of ethics that bans content which may affect “the sovereignty and integrity of India” and  asks social media companies to give out the originator of a message.

The government wants social media companies to have a mechanism to address complaints from users and An intermediary has to, within 24 hours of a complaint, remove or disable access to content that is illegal or offensive. The social media intermediaries should have a Chief Compliance Officer who shall be responsible for ensuring compliance with the Act and Rules, Nodal Contact Person for 24×7 coordination with law enforcement agencies, and Resident Grievance Officer who shall perform the functions mentioned under Grievance Redressal Mechanism. It will be mandatory for all these officers to be residents of India.

In the press conference the minister said “If there are complaints against the dignity of users, particularly woman that exploits their private parts of individuals or nudity or in sexual acts, impersonation, etc, you will be required to remove that within 24 hours,”.

Over the top platforms, such as netflix, amazon prime, alt balaji etc., will have to self regulate and classify the content on the basis of age, sex, violence and nudity,  that is for 13-plus, 16-plus or adults and a will have to provide a mechanism of parental lock to ensure children do not access content not approved for them.

These new regulations are being framed under the Information Technology Act, 2000. The experts have welcomed the rules, keeping in mind the issue of fake news and propaganda these rules will be helpful. However, it is important to regulate the flow of information on the internet but it is also important not to hamper the individual’s right to privacy and freedom of speech on the internet.

Why You Need To Hire a Corporate Lawyer For Your Business.

Don’t be a Missing Heir: How to React After an Accident

Emergency Situations: What to Do If You’ve Been Bitten by a...