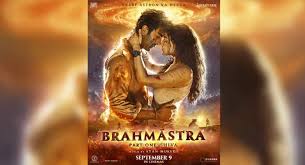 After the huge success of Sanju, Ranbir Kapoor is out with yet another movie, Brahmastra and today the trailer was released. Ranbir fans were very curious to see what the movie is all about.

After four years, Ranbir Kapoor has returned with his movie which is named as Brahmastra. This star earned Rs 334.57 crores from the movie Sanju which is directed by Raj Kumar Hirani. The ostentatious trailer is most talked about for its amazing VFX which shows the life story of the star cast.

The film has been written and directed by Ayan Mukerji and is slated to release on September 9, 2022. The film will arrive in theatres in 5 Indian languages – Hindi, Tamil, Telugu, Malayalam and Kannada with a stellar ensemble cast of Amitabh Bachchan, Ranbir Kapoor, Alia Bhatt, Mouni Roy, Dimple Kapadia and Nagarjuna Akkineni. Visionary SS Rajamouli will present the film in all 4 south-Indian languages.

Anushka Sharma took to her Instagram account saying Brahmastra was dramatic. The movie trailer looks so awesome and dramatic. She showed love towards this movie and wrote good lines for Brahmastra in her Instagram stories. Soni Razdan commented on Alia Bhatt that she was very happy and they both are looking good together.

Moreover, Ranbir Kapoor, Karan Johar and Apoorva Mehta of Dharma production are the chief producers of the film. Marikke Desouza, who has worked as the executive in various Sharma films and who’s also produced Divya Dutta-Swara Bhaskar’s illustrious short movie Sheer Qorma has also got credited as the producer. Aryan Meri is also one of the producers.

Every star shared Brahmastra in their story.Alia Bhatt’s friend Varun Dhawan is very excited after watching the Brahmastra trailer. He wrote, ‘I am so excited to watch this movie. The tailor is so good and I know the movie is going to rock’.

Stepwise Guide of Top Practices For Cloud Hosting Security in 2022

Fun Filled Things to Do in and around Jim Corbett