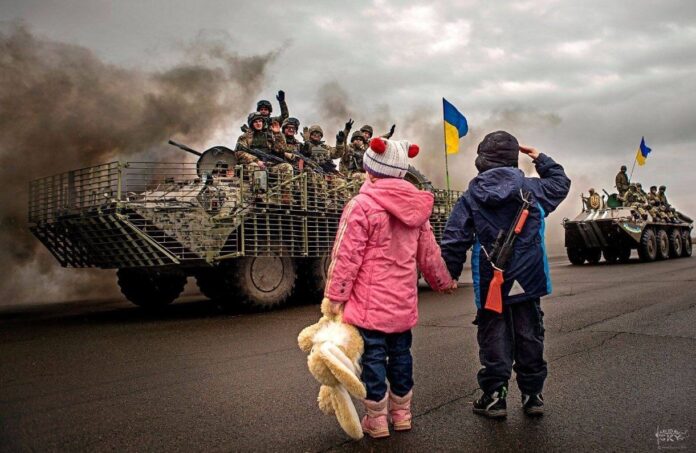 When a standup comedian was made the president of one of the largest countries in the European continent, he could not have imagined that more people would make him cry in his political life than in professional life. Seeing his defeat close today, Ukrainian President Volodymyr Zelenskyy is ready to come to the negotiating table with Russia. On February 24, President Zelenskyy learned how the United States and the NATO had used him and his country. He kept pleading for help, showing fear of people’s lives, yet none of the countries that provoked him came forward to help him. By the way, in this decade of the 21st century, when the countries of the world are establishing their narrative with high-tech AI, information and psychological warfare, even in that era, seeing this level of conflict is like a dream for billions of people, or it can be said that the opposing countries have publicized it with full bottom line, because such a density did not show readiness on the invasion in Ladakh by China, Armenia-Azerbaijan war, Yemen war, and Israel-Hamas war.

However, Russian President Vladimir Putin has announced a Special Military Operations in the name of national security, due to which thousands of soldiers and civilians of both countries have been killed so far, but it would be more appropriate to go beyond and discuss that these circumstances whose gift is it? Protecting our sovereignty as a country is certainly a primary duty for every nation, included Russia. Since 2014, Russia has been warning Ukraine not to pose a threat to them by joining NATO, but no one took Putin seriously. As a result, he captured the strategically important Crimea from Ukraine. I am even more surprised to learn that the leader of this crisis, Joe Biden and the Secretary-General of the UN, believed that Putin would never jump into a direct fight with this scale. Rather, Putin, who once wanted to join Russia in NATO, has today demolished the Iron Curtain under the guise of same group, while NATO countries including America, fled in hiding. Because everyone knows, Russia can never be defeated without ruining itself, that too when Russia has developed Hypersonic missile technology leaving America behind, and already has the most nuclear weapons, perhaps that’s why so many countries are imposing sanctions on Russia and its leaders, because that’s the only option they have.

Recently, Pakistani President Arif Alvi said in a program on South Asia that I had mistakenly assumed that America would have learned something after fleeing the Vietnam War and it would not fall into any trap again, but I was wrong. By the way, not only Vietnam, US has been directly involved in more than half of the wars in the world. Be it the Middle East, the Korean Peninsula, South-East Asia or Eastern Europe. Millions of lives have been lost in this American campaign to restore democracy in the world. At such a time, I remember former US President Donald Trump, who may be fool of personal capacity but the president was unmatched, he played an important role in ending the ongoing conflict in many areas of the world out of the box. Through Abraham Accord and in efforts to make peace with North Korea nuclear program, he has been in the forefront, perhaps the current US President Joe Biden is in pain that his popularity is falling behind even the former president. As soon as he came to power, he made the biggest blender in Afghanistan, leaving power in the hands of the Taliban. America also had to run away from Syria and now the war in Ukraine has left the US President wondering what his legacy will be.

The US President has axed his own leg in an attempt to weaken Russia, and I fear that his allies may not part ways with NATO in the years to come, because even in such a terrible war, there is no consensus in the organization. This NATO group, by dreaming of heaven, has put Ukraine’s existence in jeopardy today. A similar dream was shown by America and NATO to Georgia, but in 2008, Georgia itself broke into 3 countries such as South Ossetia and Abkhazia. It is a different matter that so far most countries have not recognized Abkhazia and South Ossetia, but Georgia’s defeat was due to this American allure, whose pain Ukraine is facing today. When the Soviet Union established its nuclear missile silos in Cuba in 1962, America was left in awe. Even then, the threat of a nuclear war was looming on the entire humanity, but through diplomacy, both the countries understanding each other’s security threat, had removed the silos from Europe-America. Today, even after the end of the Cold War, but the battle for supremacy is not over.

The fear that America felt during that time in 1962, today Russia has declared war with Ukraine as its last option, showing the same threat to the whole world, so that the country can be made safe, but ultimately humanity is being tested.

If we talk about the conclusion, then this war is being fought completely under Information Warfare. Ukraine is claiming to have killed more than 1000 Russian soldiers and 7 fighter jets by distributing weapons to its 18000 citizens; Russia is assuring the world on second side that it will not occupy Ukraine. While the Russian army has destroyed 220 Ukrainian military bases, including the capture of several strategic installations like the Chernobyl Nuclear Plant, Kiev airport and so many others. In the meantime, the fearlessness and spirit of President Zelenskyy should be saluted; he is performing with stability. Many countries, including India, are appealing to immediate stop the war for world peace, but due to Putin’s advance and large army, in the end Russia will win, Zelenskyy will have to step down and Luhansk-Donetsk is recognized as an independent country. In this way, along with Ukraine, these regions will also become like a buffer state for Russia and the world’s trust in American hegemony will once again decrease.