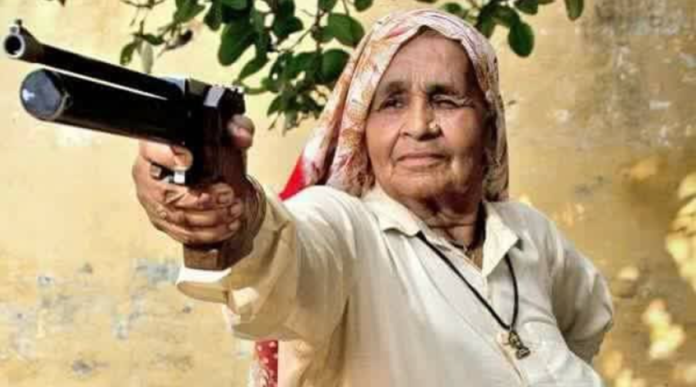 ‘Shooter Dadi’ Chandro Tomar passes away due to Coronavirus

Shooter Chandro Tomar also known as  ‘Shooter Dadi’, passed away on friday due to Covid-19. 89 year old dadi was admitted  to a hospital in Meerut on 26 April after she had complaints of difficulty in breathing. Chandro was 60-plus when she entered the sport and went on winning several medals. She also earned fame for becoming the oldest woman sharp shooter in the world. Chandro Tomar’s sister-in-law Prakashi Tomar, who is also one of the oldest female sharpshooters, tweeted with grief on Friday, “Mera sath chhuth gaya. Chandro kahan chali gayi.”  She won many national competitions along with her sister Prakashi Tomar and their achievements inspired a Bollywood movie named “ Saand Ki Aankh”.

People from various walks of life, ranging from Union ministers to film actors, have mourned the death of shooter Chandro Tomar. Taapsee Pannu, who played the sharpshooter Prakash Tomar in a 2019 film based on Tomar’s life, wrote tributes on Twitter. Taapsee shared a throwback with Chandro and captioned her post, “For the inspiration you will always be… You will live on forever in all the girls you gave hope to live. My cutest rockstar May the and peace be with you.” Bhumi Pednekar, who played Chandro Tomar in “saandh ki aankh” shared a series of pictures on Instagram and wrote, “Chandro Dadi Am so saddened by the demise of Chandro Tomar dadi Aka Shooter Dadi Chandro. Truly feels like a part of me has gone. A part of the family has gone. She lived a life full of greatness and impacted so many lives. Questioned patriarchy and broke every shackle of ageism. Her legacy will live on in all those girls whom she became a role model for.”

Other famous people including Kangana Ranaut, Randeep Hooda, and India’s aviation minister Hardeep Singh Puri took to twitter and paid their tribute to shooter dadi. Tomar is a feminist icon for young generation, she was all of 15 when she got married and took to shooting afetr she was over 65. Despite all the objections from males in the family she moved forward and made her identity as a  world recognised sharpshooter.

What are the benefits of showreel video & How much does...