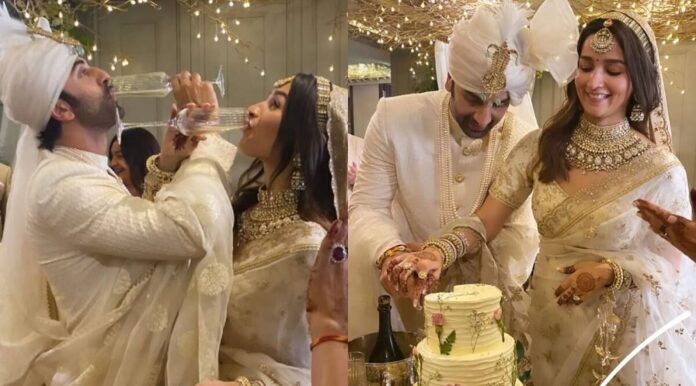 Today Alia Bhatt and Ranbir Kapoor’s wedding pictures were shared and today is a big day for them. After dating for a long time, the couple turned their relationship into marriage. The couple got married in a private ceremony and very few celebrities were invited to their wedding. Alia posted her wedding pictures on Instagram. The wedding was simple with a few celebrities attending their wedding.

The wedding venue was Vastu, the Mumbai apartment block, Ranbir and Alia live. Close friends and close family members were invited only. Saif, Kareena and other Kapoors as baraatis from the groom’s side. On the bride’s side, the guests were Alia Bhatt’s mother Soni Razdan and Mahesh Bhatt, her elder sister Pooja Bhatt and her sister Shaheen Bhatt. Navya Naveli and her parents Shweta Bachchan and Nikhil Nanda attended the wedding as Ranbir Kapoor’s cousins. Akash and Shloka Ambani also attended Alia and Ranbir’s marriage. Alia wore a white lehenga with heavy jewellery and makeup. Alia wore nude lipstick and kajal too, while Ranbir also wore light sherwani.

The other directors and celebrities also attended their wedding which was Karan Johar, Ayan Mukerji and Akansha Rajan. The bride and groom’s family members were stopped at the venue this morning. Neetu Kapoor was very happy and drove to Vastu with daughter Riddhima and Alia’s mother Soni Razdan was spotted with her elder sister Shaheen Bhatt. A Haldi ritual was held this morning ahead of the wedding. Mehendi was also a part of Vastu yesterday.

Here are the live updates of Alia and Ranbir Kapoor’s wedding.

Dilip Kumar on oxygen support, will be discharged in two three...