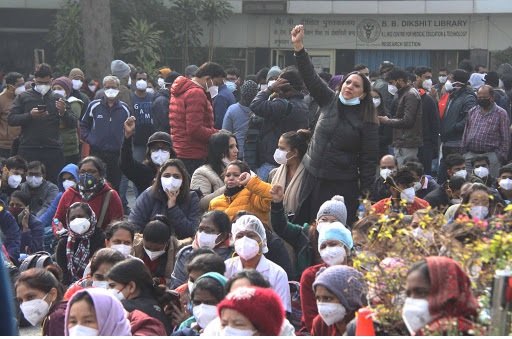 Nurses at Delhi, All India Institute of Medical Education (AIIMS) have called off their indefinite strike on Tuesday night. After the Delhi High Court’s order and a meeting with hospital administration, the union decided to return to work. After issuing a strike notice, the union began an indefinite strike on Monday. Due to the strike the whole hospital was brought to a “total standstill”, many patients had to face problems, some were referred to other hospitals, and others had to wait. The union raised various demands and issues including those related to the 6th Central Pay Commission. Whereas the hospital administration is assuring them to look over their issues, will hold several rounds of dialogues to try and resolve the demands within a week, and demands concerning other ministries would be addressed as soon as possible as well.

The Delhi High Court restrained the union from continuing with its strike after hospital authority approached the court. The hospital argued that nurses’ strike was illegal and violated an earlier order by the court prohibiting such action by AIIMS employees in special and sensitive circumstances. Whereas the court issued a notice to union from restraining their further strike as the hospital is ready to consider union’s grievances in an appropriate manner and as early as possible.

Why is International Yoga Day Celebrated?