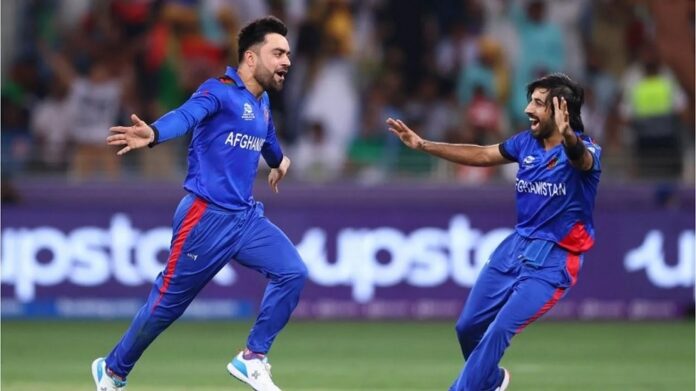 During the ICC T20 World Cup, Afghanistan spinner Rashid Khan made a great record in the match against Pakistan on Friday. He became the fastest bowler to take 100 wickets in T20 Internationals. The Afghan stalwart left behind former Sri Lankan legend Lasith Malinga in this matter. Rashid took this world record as soon as he took the first wicket against Pakistan on Friday. Now in both ODI and T20, making the fastest wicket century in his name has been recorded.

The 24th match of the ICC T20 World Cup between Pakistan and Afghanistan was considered important. The Afghan team captain, who was amazing in bowling, Mohammad Nabi, won the toss and decided to bat first. Even after a poor start, the team scored 147 runs for 6 wickets in 20 overs. Pakistan chasing the target, taking two important wickets, Rashid took his number of wickets beyond 100. Rashid, who took 99 T20 International wickets before entering the match against Pakistan, became the fastest to achieve this position.

Rashid got his 100th T20I wicket on the first ball of the 15th over of Pakistan’s innings. He got Mohammad Hafeez caught by Gulbadin Naib on the score of 10 runs off 14.1 balls. After this, he clean-bowled captain Babar Azam, who was batting after scoring a half-century. He returned after scoring 51 runs off 47 balls.

All you need to know about Golf