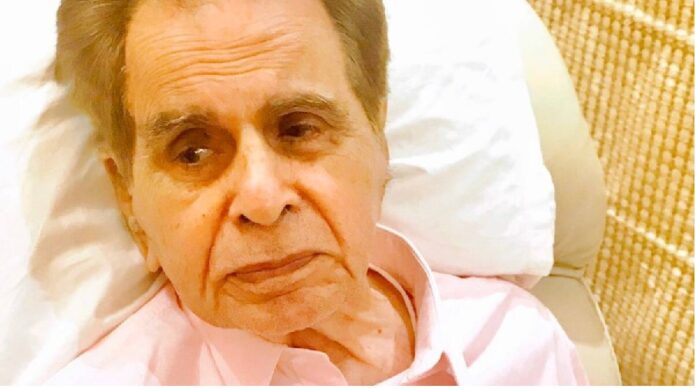 Dilip Kumar on oxygen support, will be discharged in two three days

Veteran actor Dilip Kumar,98, was admitted to Munabi’s Hinduja Hospital on Sunday after he complained of breathlessness. Informing about the superstar’s health, his twitter handle posted an update saying  “Dilip Saab is on oxygen support – not on ventilator. He is stable. Waiting for few test results to perform pleural aspiration : Dr Jalil Parkar, chest specialist treating Saab,” his twitter handle is run by Kumar’s wife Saira Banu and friend Faisal Farooqui.

Slamming the rumours about the actor’s ill health, his wife Saira said Dilip Saab’s condition is stable and thanked everyone for their wishes. Twitting from Dilip Kumar’s official Twitter handle, she  wrote, “Don’t believe in WhatsApp forwards. Saab is stable. Thank you for your heart-felt duas and prayers. As per doctors, he should be home in 2-3 days. InshAllah.”

Due to death rumors spreading about Kumar’s health, his family has requested the media to consider  his official tweets as a one-stop source for all his health updates. Dilip Kumar’s family friend Faisal Farooqui wrote from Kumar’s Twitter handle, “Request to media: Millions of Dilip Saab’s fans look up to you for updates on his health. You have always done a great job. Please verify from this twitter handle instead of calling anybody who may not have direct knowledge. – FF.”

Legendary actor Dilip Kumar is best known for his starring roles in films like Madhumati, Devdas, Mughal-e-Azam, Ganga Jamuna, Ram Aur Shyam and Naya Daur.  In his long career he has been honoured with many awards such as the Padma Vibhushan in 2015, the Padma Bhushan in 1991 and the Dadasaheb Phalke Award in 1994.