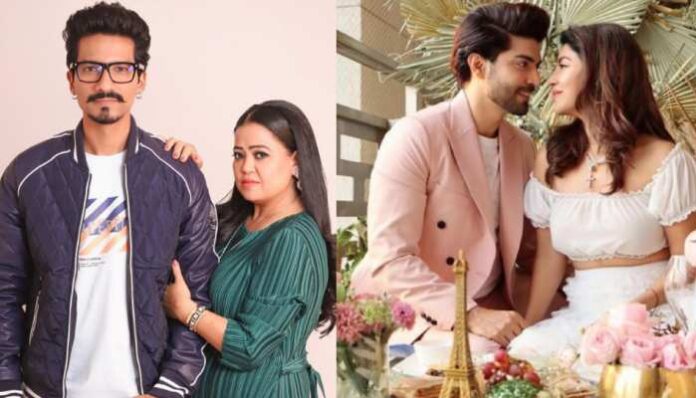 Bharti started her career in the tv show Laughter Challenge which was telecasted on Star One. In this show, she gained popularity and became famous. After that, she did many shows. Now she is the wife of Harsh Limbachiyaa and mother of a baby boy which she gave birth to today.

Today Bharti Singh gave birth to a baby boy. Many other celebrities congratulated her, Hina khan, Jasmin Bhasin, and Jay Bhanushaliand is very happy after listening to the good news and they are showing their love through social media by sending love messages to Bharti Singh and Harsh Limbachiya. Bharat Singh was pregnant in December last year. Bharti belongs to a Punjabi family but married Harsh Limbachiya who is a Gujarati by birth. They married in 2017 and the cute couple are now blessed with a cute baby boy.

Bharti Singh shared a picture of the baby boy posing together with Harsh Limbachiyaa. It’s a baby boy, she wrote in the post she shared. The media and her fans were surprised when they heard this news.

On social media, the rumours are that Bharti Singh gave birth to a baby girl. This news is fake and has now been confirmed that all those were rumours that ended with this good news. They both announced the baby’s gender.

Harsh shared the news and posted a picture from Bhartis’s pregnancy photo shoot. It’s a boy! He shared the picture on Instagram. Hina Khan congratulated both. She further quoted ‘I am very happy for you both. May God bless you. Bigg Boss 15 fame Umar Riaz wrote ‘Congratulations to both of you seriously. I am very happy. Many celebs congratulated this couple. Delnaaz Irani, Arjun Bijlani, Pratik Sehajpal, Abhishek Nigam, Neha Kakkar, Vishal Aditya Singh and others posted in the comments section to congratulate this sweet couple on this new step in their lives.

After a long time, they were blessed with a baby and they were very happy. After the birth of the baby, Harsh cried and kissed the baby on his forehead. They were expecting their first child in December last year. They both are hosting two shows, Khatra Khatra and Hunarbaaz: Desh ki Shaan.

The couple had announced that they were expecting their first child in December last year. The duo currently host two shows together, Hunarbaaz: Desh Ki Shaan and Khatra Khatra Khatra.

Water cleaning is highly important these days as it is extremely...

Choosing the Perfect Lipstick Based On Skintone and Undertone