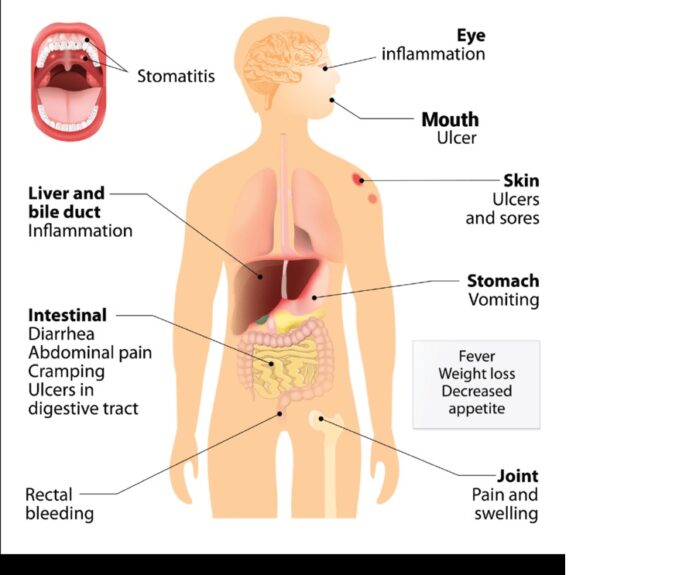 Crohn’s disease (CD) is an inflammatory bowel disease (IBD) that affects a person’s digestive tract, most commonly the small intestine. The disease may affect the entire thickness of the intestinal wall, and the person may experience certain symptoms like severe diarrhea, abdominal pain, rectal bleeding, fatigue, and weight loss. Crohn’s disease is classified into five types, each of which affects a different part of the gastrointestinal tract and shows different symptoms. Let us know about them in detail.

Types of Crohn’s disease and symptoms

People who suffer from Crohn’s disease are more likely to have ileocolitis. It is the most common form of Crohn’s disease that affects the ileum and colon. “Ileum” is the last part of the small intestine that helps in the digestion of food, whereas “the colon” is the part of the large intestine that helps in turning waste into stools. When these two regions of the digestive tract get affected, the person may experience the following symptoms:

This type of Crohn’s disease affects only the ileum, causing inflammation and irritation there. The ileum is responsible for the absorption of vitamin B12 and bile salts, which help the large intestine with the absorption of water. People suffering from ileitis experience the same symptoms as those suffering from ileocolitis, but they may also develop gastrointestinal fistulas. Fistulas or inflammatory blisters may form in the lower-right section of the abdomen.

This type of Crohn’s disease affects the stomach, esophagus, and duodenum, which is the first part of the small intestine. The major role of the duodenum is to digest the food coming from the stomach and absorb the nutrients, including vitamins, minerals, carbohydrates, fats, proteins, and water so that the body can use them. A person suffering from gastroduodenal Crohn’s disease may experience the following symptoms:

The person suffering from this type of Crohn’s disease experiences patches of inflammation in the jejunum. The jejunum is the part of the small intestine between the duodenum and ileum. Like the duodenum, the jejunum also plays a very vital role in digestion by digesting essential food nutrients and hydrating the body. The person suffering from jejunoileitis may experience the following symptoms:

This type of Crohn’s disease affects only the colon. The colon is the main and longest part of the large intestine, which plays a very vital role in dehydrating the body from what’s left of the food in the digestive process and converting it into stools. The person suffering from Crohn’s (granulomatous) colitis experiences general inflammation in the digestive tract that can be seen as abscesses, fistulas, and ulcers around the anus. Other symptoms that the person may experience include:

How does Anxiety affect Sleep